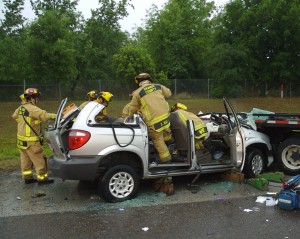 WEST PALM BEACH – Tragically, a woman died on the Florida Turnpike Friday, December 14, 2012 near the Okeechobee Boulevard exit in Palm Beach. It happened at 5 a.m. The associated press reports that the Florida Highway Patrol said that she tried to avoid a crash in front of her but was struck by a vehicle behind her. The accident caused the southbound lanes to close.

And, The Palm Beach Post reports that a pickup truck driver hit the median concrete wall in the center of the highway.  He spun and ended stopped in the road.  The woman who unfortunately died was driving a Mazda and may have hit that truck or stopped just before hitting it. Then, unfortunately, another pickup truck slammed into her, in what appears to be the accident that caused her to pass away. She expired at the hospital. The first  driver was also taken to the hospital. The police, Florida Highway Patrol, will continue to investigate.

We are Miami Beach and Miami personal injury lawyers and handle cases throughout South Florida. Thirty percent or more of our cases are filed outside of Miami-Dade County and we have extensive experience litigating in Palm Beach County, Broward County, and throughout the state west to Collier County and as far north as Jacksonville.

In handling cases like the above, it is important to make sure that the parties, insurance companies, or anyone in control of any vehicle involved in the accdient, preserve the vehicle so that inspections can be done of the damage to the vehicle and any technological portions of the vehicle that retain data from the accident. For example, cars built in the recent 10 years nearly all have a crash data recorder. Such a recorder retains information from the time of impact. The information retained could include speed, air bag deployment, brake usage, seat belt usage, and other potential factors that played a role in the accident and injuries suffered in the accident.  The recorder is referred to and regularly called a “black box”.

Proper practice is to give notice to any person, firm, corporation with custody and/or control of the vehicle requesting preservation of the automobile and such a “black box”. Now, whether  or not that person has a duty to preserve the car is another story. Florida law dictates that they need notice that a lawsuit or litigation may ensue and have to be in a class of people who would have a duty to preserve such a car if given notice. In a case like the above, the owner or insurance company most likely would have a duty to maintain and not destroy the car. But a specific notice letter would have to be sent to them almost immediately. If the evidence is subsequently destroyed, it could be the subject of a spoliation of evidence claim which is a separate cause of action directed at recovering for the fact that the person who destroyed the evidence made it more difficult to prove one’s case or defense.

The above accident is a devastating reminder of how fragile life is and a horrible tragedy for the victim’s family at this holiday time. This accident appears to have been completely outside of her control. It is a sad reminder that driving on the open road is extremely dangerous and many perils are totally outside of your control. For the things that are inside your control, we all need to do our best to make it a safe place for others.

Have a safe and healthy holiday season.