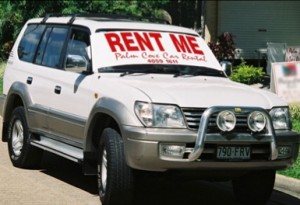 MIAMI BEACH – One of the more confusing moments in renting a car is the moment in time when the rental agent tries to sell you insurance on the rental. What should you do?

If you have insurance on your personal car and it provides rental coverage, usually the answer is “no” because it would be a waste of money. That doesn’t mean that you will be covered for everything that happnes. But, chances are that if you have your own coverage, buying additional coverage sold by the rental comapny is a waste. But read below to make sure.

The rental agencies will try to sell you two things. The first is loss damage waiver. And the second is liability insurance. There are other coverages that they may try to sell. But these two are the basics and this article is limited to discussing the pros and cons of purchasing them depending on what coverage you have.

END_OF_DOCUMENT_TOKEN_TO_BE_REPLACED

MIAMI BEACH – The cost of car or automobile insurance in the urban Miami Beach and Miami markets is high and not looking to go down. You buy insurance for those times when luck isn’t with you and someone else ino tap paying attention. Automobile coverage and specifically Personal Injury Protection, is a no-fault automobile insurance coverage. It covers your medical bills up to $10,000.00.  And, Personal Injury Protection covers out of pocket expenses and lost earnings.

Recently, the State Legislature passed a law reducing benefits for victims of automobile crashes. The benefits that were reduced were for payments to massage therapists and acupuncturists. One would think that this would reduce premiums for people. But it hasn’t. Insurance rates have not dropped. And, recently, Jeff Atwater called for the companies to realize the savings and reduce premiums.

END_OF_DOCUMENT_TOKEN_TO_BE_REPLACED

In Florida, if you get hurt on the job, you can seek medical expenses and lost wages / earnings through your employer’s worker’s compensation insurance. The law requires all employers who are not very small companies to carry the insurance coverage that would pay only for your medical bills and lost earnings up to what is called a “maximum weekly wage” set forth by Statute. Otherwise, your boss / employer is immune from suit and protected and cannot be sued for other damage like pain and suffering, future medical needs, mental anguish, loss of capacity to enjoy life, etc.

But, under some circumstances, you can still sue your boss for pain and suffering, future medical needs, mental anguish, loss of capacity to enjoy life, etc. But when does that happen?

Florida law says you can sue your boss/employer for personal injuries (pain and suffering, future medical needs, mental anguish, loss of capacity to enjoy life, etc) when he, she, or it acts intentionally or in a way that is virtually certain to cause death or great bodily harm. Take a look at the actual statute by clicking this link: www.flsenate.gov/Laws/Statutes/2011/440.11.

END_OF_DOCUMENT_TOKEN_TO_BE_REPLACED

When an insurer does not settle an Uninsured Motorist case and a Plaintiff sues and gets more than the coverage limits, the Plaintiff can recover the excess judgment if his or her lawyer can show certain factors and perfects the claim. First, such an effort to recover the excess judgment is called a “bad faith” claim. Next, if the bad faith claim is against one’s own insurance company, it is called a “first party” bad faith claim. Such a “first party” bad faith claim has to be perfected by filing a civil remedy notice under Florida Statute 624.155. You can see that law by clicking on this link: http://www.flsenate.gov/Laws/Statutes/2011/624.155. Anyhow, if a Plaintiff gets an excess judgment and can show bad faith and that they complied with Florida Statute 624.155, he or she might be able to get even more money than the policy of insurance they paid for.

On March 30, 2012, the 5th District Court of Appeals ruled in a bad faith first party case. The case was Higgins v. West Bend Mutual Insurance Company. The Higgins were from Minnesota and their insurance policy, a contract, was entered into in Minnesota. They got into an accident while vacationing in Orlando. The Higgins recovered $100,000.00 from the person who caused the accident, or the “third party”. Then, they presented their case to their own insurance company for underinsured motorist coverage. They had $100,000.00 in uninsured motorist coverage.  Their own insurance company refused to pay that. So they went to trial. And they won a $260,000.00 verdict. The court ordered West Bend Insurance Company pay their $100,000.00 limits, which they did.

END_OF_DOCUMENT_TOKEN_TO_BE_REPLACED

Our firm represents people against their own insurance companies to get benefits that the insurance company has refused or failed to pay. It doesn’t matter if it is health insurance, car insurance, homeowners insurance, disability insurance, or any other type of insurance. If your company doesn’t pay something that they should have, we will fight for you to get the compensation you deserve. And you don’t have to pay us or forward costs.

We take these cases on a “contingency” arrangement. We can do this because there is a Florida Law that says that if you beat an insurance company in court, they have to pay your attorney’s fees and costs under Florida Statute 627.428(1). These cases against your own insurance company are called “first party” cases.

On March 22, 2012, the First District Court of Appeal filed an opinion in a case involving FIGA. FIGA is the Florida Insurance Guaranty Association. They take over insurance companies that have failed or are on the verge of failing. FIGA is funded through industry assessments that are capped at 2% of a company’s net premiums and an additional 2% to cover insolvencies created by hurricanes, etc. If your company goes belly up, FIGA will stand in its shoes and pay your claims to a limit. The limit is generally $300,000.00. An additional $200,000.00 can be available under certain circumstances. And in condominiums, the limit is $100,000.00 per unit. For detailed explanation of what happens if your insurance company goes under, click on the following link: http://www.figafacts.com/faq.